What is Hyperbaric Medicine (HBO)?

Hyperbaric oxygenation (HBOT) is a 100% oxygen inhalation treatment inside a hyperbaric chamber. The patient is seated or lying in a hyperbaric chamber which is compressed to an overpressure of 2 bars. Oxygen is breathed through a mask, hood or tracheostomy tube. Depending on the disease, treatment lasts 90 to 300 minutes or more. It may be necessary to repeat the treatment several times a day.(more)

Scheme of our hyperbaric chamber 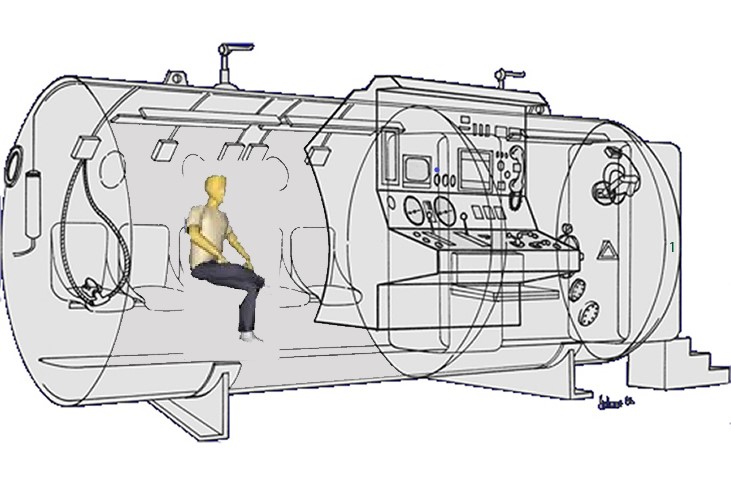 Patients can be treated sitting or lying down, depending on their state of health or the number of patients present. The taking of pure medical oxygen (Carbagas) is done either through a facial mask, a transparent hood, a closed and tight respiratory system which is glued directly around the tracheostoma or through a tube in intubated patients. The duration of oxygen respiration is always 2 times 45 minutes except for diving accidents where it generally lasts 5 hours. 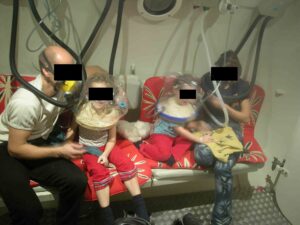 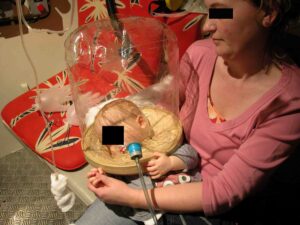 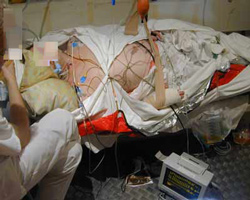 breathing through the tube 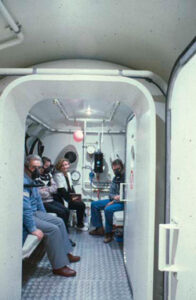 Patients with inside tender 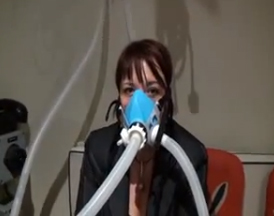 breathing through a mask

The effect of the Boyle’s law (p1xv1 = p2xv2) can be seen in many aspects of HBO. This can be useful for embolic phenomena such as decompression sickness (DCS) or arterial gas embolism (AGE). As the pressure increases, the volume of the bladder decreases. This is also important during decompression of the chamber. When a patient holds their breath, the volume of gas trapped in the lungs increases and can lead to pneumothorax.

Increased amount of oxygen in the blood

The Henry’s law says that the amount of gas dissolved in a liquid corresponds at the partial pressure of this gas on the surface of this liquid. In the compressed chamber, more oxygen can be dissolved in the patient’s plasma than outside the pressure chamber.

Increased amount of oxygen in the tissues

Since the blood carries much more oxygen, it can supply the tissues with enormous quantities, especially where it is lacking. Then there are chemical reactions that trigger the healing process. This increased pressure causes oxygen to diffuse into the tissues and thus reaches areas with poor vascularity. The distance at which oxygen can diffuse from the last capillary is calculated with the mathematical diffusion model of Krogh

Side effects and contra-indications of HBO

Side effects caused by pressure

Pressure damage to the middle ear
Between 13% and 17% dof patients complain of decreased hearing, ear pressure or severe ear pain. Symptoms go away within days without treatment or with nasal drops. Sometimes the treatment needs to be off for a few days.These side effects (Teed classification) can be avoided with a slow pressurization. If the patient has a cold or a flu, he will not be able to equalize. As a precaution, we stop the treatment until he is better.
Sinus pressure damage
This rarely happens. The exact figures are not known. In 30 years of our activity, we have never met such a case. The damage, mainly to the maxillary sinuses, usually occurs during decompression and manifests as pain and bloody nasal mucus. Treatment consists of slow decompression, nasal drops, and pain relievers if needed.
Pressure injuries to the lungs
Less than 1 per 100,000 treatments. We have never seen it in 35 years of activity. Caution is advised in patients who have previously had pneumothorax or in patients with pulmonary bubbles. If this happens, it is in the decompression phase. Treatment must take place in the hyperbaric chamber during the session with an appropriate drainage. Lung transplantation is not a contraindication for HBO.

Central nervous system
Only in the form of a grand mal type epileptic seizure. The frequency for patients without risk factors and a compression pressure of 240 to 250 kPa is between 1 attack per 12,000 to 14,000 compressions. As additional protection, we introduce oxygen pauses in the middle of the session . There are no sequelae and the EEG is normal. There is no individual brain hypersensitivity to oxygen. We note that the level of NO is suddenly increased just before the crisis which causes increased cerebral blood flow and consequently free radicals.
Vision
Up to 78% of patients develop temporary myopia after 40 consecutive treatments. This number is higher when patients inhale oxygen through a hood instead of a face mask . It is believed that this may be due to an opalescence of the lens which changes its refractive power. After a few months, the myopia disappears again, but there are traces of it that the patient does not realize. An ophthalmic examination is not necessary. Cataracts have been described after more than 100 consecutive treatments .

HBO immediately increases the partial pressure of oxygen in the blood and tissues.

In the open air, we cannot breathe more than 100% oxygen, in a medical hyperbaric environment the pressure can increase up to 3 times, which increases the amount of oxygen free radicals and of oxygen (up to 300%) and . This allows oxygen and their radicals to diffuse in the tissues better and further. Oxygen free radicals are mainly produced in cell mitochondria. These radicals lack an electron which makes them very unstable, it is why they will rapidly interact with enzymes, proteins, or genes in our body. It is this responsiveness that underlies most of the effect of HBOT. Due to their toxicity, free radicals immediately increase the production of free radical scavengers to achieve a protective balance.

Hyperbaric oxygen therapy is supported in ambulatory (TARMED) and hospital (DRG) settings for the following situations:

Despite the fact that scientific data are rather more in favor of hyperbaric oxygen therapy for the following indications, there is no coverage by the Swiss health funds while this is sometimes the case in other countries.

For emergency outpatient treatment such as decompression sickness, the TARMED position 15.0380 is used, corresponding to an hourly rate of 450.36 francs. Such a first treatment usually lasts 5 hours, additional treatments if necessary usually last 2 hours.

For non-urgent treatments, usually lasting 2 hours, we use the TARMED position 15.0370 which corresponds to an hourly rate of CHF 121.88 .

For hospitalized patients, the treatment costs are included in the hospital package. Hospitals can charge insurances for the extra costs caused by HBOT by using the following positions.

We are currently running a research program with the university of Basel on the treatment of old stroke with hyperbaric oxygen. We are still looking for patients who would like to participate. This research has been approved by swissethics. Participation is completely free. You are interested: call 061 631 30 14 or write us an email at “email@swissoxygen.ch”